Have a question about the RANGER, or need help fixing a problem? Try searching here first, your issue may already be solved. If you’re not able to find your answer, please contact our tech support at +1 978-212-2868 x2, submit your question using the web chat, or fill out the contact us form.

How do I create a new SignalFire Cloud account?

*note: If your company already has an account, ask your SignalFire Cloud administrator to create a user for your login.

How can I create accounts for other people?

Any account with “User Admin” permissions can add additional users, by clicking the “Add User” button in the Users window. Be sure to assign the new user the appropriate user permissions

How many users can I have on my SignalFire Cloud account?

How long is my data stored for on the SignalFire Cloud?

The data is stored for 3 years. The latest information will replace the oldest data after 3 years

What happens with the measurements if the cell connection drops?

The RANGER will store the last 200 events that have changed since the connection dropped, and then send that data to the cloud when the connection is restored

What MQTT tags does the RANGER have?

The RANGER uses the Sparkplug B MQTT format. Tag guides that detail all data tags from the RANGER can be found in the download tab for the RANGER on the signal-fire.com website

How do I hide tiles to remove clutter?

From the Node Status Tile, select “Hide/Show Tiles”. From this view unused tiles can be hidden from view. These changes will apply for all users within your group.

Will the RANGER immediately report a measurement based on a threshold?

The RANGER can be configured to report immediately on change for its digital inputs. The Analog, HART, Modbus, SDI-12 inputs are only sampled at the configured reporting interval. The Fast Reporting feature can be configured to start reporting at a faster interval if an input crosses a threshold, or can report all inputs on the change of a DI trigger

I forgot my SignalFire Cloud password, how can I reset it?

Can I limit a SignalFire Cloud user from making changes to a RANGER?

I want to see different columns on the Dashboard, how do I add/modify ?

You can customize the columns from the Home Screen.

Can I change my RANGER from one SignalFire Cloud account group to another?

Yes. If you select a RANGER, from the Node Status tile select Configure Node. From this screen you can “release” the RANGER from the group and it can then be claimed by another user group

How do I know when my subscription will expire?

You can view the expiration date on the Cloud through two ways:

Furthermore, an email will be sent to the billing contact 60 days prior to expiration.

What happens if my subscription expires?

The SignalFire Cloud will keep collecting data for up to 30 days, but the live view will show data up to the point of expiration. After 30 days past expiration, the SIM card will become inactive and the RANGER will stop collecting data.

How secure is the connection between the RANGER and SignalFire Cloud?

The RANGER supports TLS 1.2 with full validation to ensure a secure connection between the RANGER and the MQTT broker. Customers using their own MQTT broker have the option to load their own TLS certificates into the RANGER in addition to the factory certificates which are used to connect to the SignalFire Cloud

How many users can I send alarms and text to?

How fast can a RANGER report in?

The fastest reporting interval is once every minute

Can I add multiple phone numbers to the SMS field?

No, each user account only supports one phone number. To add another phone number, you need to create another user

How do I remotely write to a Modbus register?

From the SignalFire Cloud, click the Modify button in the row containing the Modbus register to write. In the pop-up configuration window, enter the new register value and click the Set button. Note that the Register must be configured as a read/write register.

How do I connect to a custom MQTT broker?

What networks are available?

The RANGER’s modem supports both LTE-M Cat1 and NB-IoT cellular standards. The bands are specific to each carrier. Compare the available bands on the RANGER with the one from your cellular carrier. Currently, the RANGER is certified with Verizon, AT&T and has been connected to other networks like Rogers, TELUS, Bell, O2, Vodafone, Orange. SignalFire currently provides bundled data services through Verizon

What type of SIM card do I need?

The RANGER requires a 4FF size (nano) SIM. The SIM card and data plan much be capable of supporting LTE-M or NB-IoT networks. This is different than a standard 4G data SIM

How do I configure the RANGER for a carrier if I’m using my own LTE-M Carrier/SIM Card?

Can I use a regular LTE Data plan?

No, the RANGER requires a IoT data plan specific to LTE-M or NB-IoT service

What APN do I use?

How do I use my own TLS certificates?

Will I get a GPS location if installed indoors?

The RANGER needs a clear view of the sky for the GPS to obtain a position, and is unlikely to get a position fix indoors.

How can I find out if there’s LTE-M or NB-IoT coverage in my area ?

In the USA, you can use https://www.cellmapper.net/map to locate cell towers and coverage. We also recommend using the website of the carrier.

Can someone “ping” a RANGER to get into it?

The RANGER does not have any open TCP ports or a public IP address so it not accessible over the internet. The RANGER initiates a secure connection to a MQTT broker and all data must pass through the broker

How do I set the TCP/IP address of a RANGER?

The RANGER does not have a public IP address, so this is not configurable

What is the difference between LTE-M and NB-IoT?

Both LTE-M and NB-IoT were developed by the 3GPP to address the growing need for wireless IoT (Internet of Things) devices, which need to consume as little power as possible, operate in remote areas, and are typically only sending a few bytes at a time.

LTE CAT-M1 (abbreviated LTE-M) is based on the existing cellular LTE framework your mobile phone uses, modified to serve low power IoT applications. For this reason, LTE-M is the dominant wireless IoT platform used in countries that have widely available existing LTE networks such as the U.S., Brazil, and Germany.

NB-IoT (Narrow Band IoT) is based on older GSM and CDMA technology and attempts to use large open sections on those spectrums. NB-IoT is being rolled out in countries that don’t have much LTE coverage and where GSM and CDMA are still popular, such as India, China, and South Africa.

What certifications does the RANGER have?

The RANGER is certified as follows:

Is the RANGER certified for my country? Where can I check?

Does the RANGER have an IP rating?

The RANGER does not have an official enclosure rating, but is rated for outdoor environments and most closely follows NEMA/IP 3

Is the RANGER submersible?

No, the RANGER is not rated to applications where it may become submerged

Can I use my SignalFire RF products with the RANGER?

The RANGER900 combines a SignalFire 900MHz Gateway with the RANGER. You can also connect the SignalFire’s Gateway Stick or DIN Gateway to the RANGER’S Modbus input. This requires the Modbus option with the RANGER. The number of registers is limited to 32 datapoints from up to 8 slave devices.

What pressure ranges are available for the Pressure RANGER?

What connections are available for the Pressure RANGER?

What power options are available?

The RANGER can be powered by an internal 4D Lithium Thionyl Chloride high capacity battery pack (the default option), the SignalFire High Capacity solar system, or from an existing DC power source with the DC-DC converter option. The DC-DC’s input range is 9-36VDC

How can I upgrade the firmware?

Firmware can be updated over the USB port using the RANGER ToolKit under Tools –> Update Firmware. Make sure to select the correct firmware file for your expansion card Over-The-Air firmware updates are also supported, but must be initiated by SignalFire at this time

How do I set up a HART device?

How can I calculate battery life?

Why don’t I see my COM port?

You may be trying to connect to an older unit. Check off “Show All” and click Refresh. You may also have a “charge only” cable.

Can I use any type of micro-USB cable? Why isn’t my cable working?

Some micro-USB cables are “charge only” and do not contain the data lines required to communicate with the RANGER. Each RANGER ships with a micro-USB cable included. If the computer doesn’t create a COM Port when plugging in the RANGER to the computer, this means that the USB Cable doesn’t have communication capabilities

What inputs and outputs are available on the RANGER?

The base RANGER has 2 digital inputs, 1 analog (4-20mA/1-5V) input, and 1 digital relay (SPDT) output. The analog input can power sensors with either 13V or 18V selectable in software. The RANGER also has an expansion slot to add more I/O.

Yes, the RANGER has an expansion slot to add more I/O with a daughter card. Available cards are 2AI1DI (2 analog, 1 digital), HART, RS485 Modbus, and SDI-12.

How do I switch expansion cards? 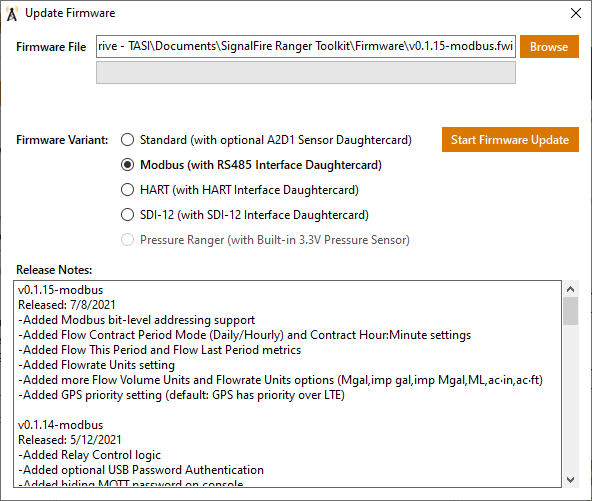 How do I calibrate the analog input?

What is the relay rated for?

Can the RANGER do flow totals?

When should I use an external antenna ?

An external antenna can be useful in applications whenever the signal is -110dbm or less or when the connection drops out frequently (many times/day). Using an external antenna also allows for a directional antenna, which can greatly improve signal strength when pointed at the nearest cell tower.

What is the minimum sensor on time?

The Sensor On Time can be set to 0 for externally powered sensors, and as low as 0.001 seconds (1ms) when the RANGER is powering the attached sensor(s)

Does the digital input still count pulses in between reporting interval?

What is the maximum sensor on time?

120 seconds, or Sensor Always On

How many days can a Solar Panel power a RANGER without sunlight?

This depends on the connected sensor(s), sensor-on time and reporting interval. The RANGER ToolKit will provide the average current draw for a specific configuration. The days of operation with no sun on a fully charged battery can be calculated using the following formula: Days = 6300 / (24 * average current)

Can I add an expansion card to the Pressure RANGER?

No, the Pressure RANGER only supports its built-in pressure sensor. For applications that need measurement points in addition to pressure we recommend using an external 1-5V pressure transducer

Do I need a pull up or pull down resister on the RANGER for my pulse output meter?

The RANGER has an internal 470k pull-up resistor to 3.3V and typically does not require any external resistors when connected to meters with open collector, pulse or dry-contact outputs

Will the RANGER work underground?

The cellular signal will be weaker when not out in the open, so if the location is in a poor coverage area to begin with it may not work. An external antenna is recommended in these situations